The 2018 International Genetic Genealogy Conference – A Review: Day One

Last month, in a fitting adventure to celebrate the end of 2018 (aka launch year for Toll Genealogy), I headed out on a transatlantic journey to attend the 2018 International Genetic Genealogy Conference in San Diego, California.   The trip was only possible for me due to an incredible deal on my flight and felt incredibly serendipitous.

I flew in via Seattle, and upon arrival at San Diego airport, evidently the weather had decided to make me feel at home by welcoming me with a flash flood.

This made actually getting to my hotel (which was also the conference venue) quite an adventure, involving climbing over a fence and pushing my way through a hedge (the alternative was wading through at least knee deep water.  Apparently when it rains in San Diego, it really rains).

Far from being an inauspicious start to my trip, I relished in the invigorating rain, and a quick shower saw me as good as new!

Day One was ‘Company Day’, and following a welcome from CeCe Moore, representatives from each of 23&Me, My Heritage, AncestryDNA, FamilyTreeDNA and LivingDNA gave us some insight as to new things recently introduced to their tools, and what we can expect going forward. From what I understand, this day, being a Friday, is usually less well-attended than the weekend days, but the room was packed.

Hilary Vance from 23&Me told us about recent updates to their ancestry composition report, including new definitions for Sub-Saharan Africa and East Asia.  They have also introduced a tool which paints your DNA by your ancestral source data.  We also learned that 23andMe currently has 45 reference populations, made up from public datasets including, among others, the Human Genome Diversity Project, the 1,000 genomes project, and from its own customer base where people have opted-in to this.

Hilary also explained how their ‘Ancestry Timeline’ functions.  It basically works on a balance of probabilities (with a 70% confidence threshold) that a particular segment on the customer’s chromosomes came from a particular reference sample.  If they know they can broadly say that someone’s DNA fits a certain wider area they go to a narrower area.  If they can broadly say the same thing for that area, they go to the next, and so on.  As you can see from my timeline below, it indicates that I had at least one most recent ancestor who was definitely British (true), but going back to the 1860s it gets a little woollier.  As I understand it, the graphic is indicating that I had one 2x, 3x or 4x great-grandparent who was 100% French or German.  In fact, at least one of my 2x great grandparents was of Dutch and German Descent, and another was likely half British or Irish and half German or Dutch, so this is accurate for me.  I don’t yet know where it’s picking up the Scandinavian and Finnish from. I found the explanation of this tool really interesting and I’m keen to understand it and am considering asking my parents to test at 23andMe, just so I can work with the tool better.

All in all, I found the presentation very informative and enjoyable, and a great start to the day. 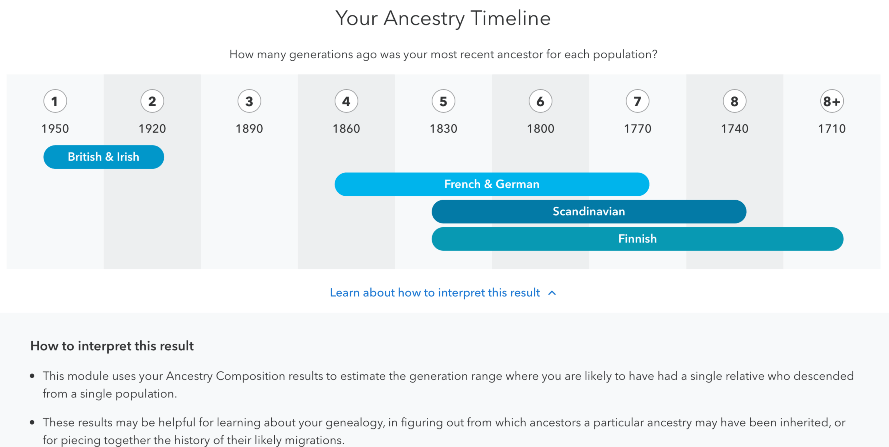 Ran Snir gave us an inside look at what’s been happening at My Heritage and told us about their DNA Quest project, which is a pro-bono project they have been running, which aims to help adoptees and their birth families to reunite through DNA testing.  They are giving out 15,000 free kits to eligible participants.  You can find out more about the project here.

Ran introduced us to their triangulated segments tool which is available through their one to many chromosome browser.  It allows you to quickly find any DNA segments that you share with two other matches.  Sadly I can’t demonstrate this for you as yet, as I wasn’t able to find any triangulations in my matches, but it looks very cool!

My Heritage is creating its own ‘big tree’ (which sounds similar to WikiTree) and will predict how you and a match are related and will show you exactly how they came to that theory.  This technology will utilise their Smart Matches functionality.  I’m not sure when it will be live, it doesn’t seem to be live for me at the moment at least.

Around the time of AncestryDNA’s talk, my jetlag was kicking in, so I’m afraid from here my notes get a bit sparse.  What I can tell you is that I didn’t find Ancestry’s talk anywhere near as inspiring as 23andMe or My Heritage.  In the speakers’s defence though, I understand that he was a stand-in for the scheduled speaker, who had had to pull out. 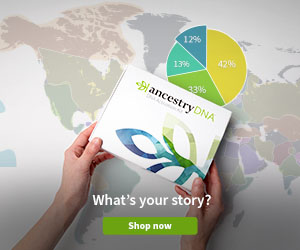 The most important takeaway I learned from his talk was that AncestryDNA has no intention of ever introducing a Chromosome Browser, which was met by a fair amount of consternation in the room.  We weren’t shown anything new, other than the recent changes to their DNA relatives interface which means that you can now see whether or not a match has a tree, and the centimorgan amount shared is now visible from the main page.

Interestingly, Margo Georgiadis, the current CEO of Ancestry, sent all of Ancestry’s customer a New Year’s message, which indicated that “We have listened to your feedback and our ambitious plans for the new year include debuting many features that you have suggested. These include… an enhanced experience for connecting with your DNA Matches…” It remains to be seen whether or not these will be truly enhanced.

I know a lot of people don’t care about the chromosome browser, but a lot of people do, including me.  Ancestry always cited privacy as the reason they won’t introduce a chromosome browser, but this makes little sense to me as long as they make a browser opt-in only; i.e. by default you are opted unless you choose to opt in. This is the way that 23andMe’s browser works.  I foresee them either changing their mind as their competition starts to catch up with them, or never changing their mind and eventually losing their status as the market leader in this area.  My Heritage  really hot on their tails and offering a great user experience.

Jim Brewster of FamilyTreeDNA was a wonderful speaker, and woke me up after the Ancestry talk! He was also so hilarious that at one point I literally spat the water I was drinking out all over my laptop, because he made me laugh so hard, and much to the amusement of the people behind me!  Thankfully he didn’t cause any damage to the laptop, otherwise, I would have had to have words with him afterwards.

Jim talked about the new public haplotrees, feature, and some functionality that has been added to those who have Big Y test results.  From the Y37/67 etc match screen, you can now see your Big Y-500 STR differences with matches who have Big Y tested.  Unfortunately, my dad has zero Y matches within a genealogically useful timeframe, so I don’t really understand what this tells you as I can’t see it for myself!  He also demonstrated FamilyTreeDNA’s wonderful new chromosome browser. Finally, session-wise at least, it was the turn of LivingDNA, and the very excellent Katie Welka.  Here I’m going to have to rely on my (admittedly faulty) memory, as apparently, I was so jetlagged by this point, I managed to take no notes whatsoever!  What I do recall is that I was really impressed by the talk, I must have been because by the time I got home I’d ordered a ‘spare’ LivingDNA kit in case I can get a family member to test as well as me (preferably one with a Y chromosome…).

At the moment, LivingDNA appears to be concentrating on doing Britain really, really well.  It is working to get a better Irish reference set (I hope I remembered that correctly, and Germany is also on its list of populations where they are actively trying to get a good reference set).  Its DNA relatives function ‘Family Networks’ is launched in Beta, and thanks to its partnership with FindMyPast, hopefully it will populate fairly soon.  At the time of the conference it was still being rolled out, and so my own parents (whose DNA I was able to upload via FindMyPast) weren’t yet showing as related to me, they now are (thankfully!).  Unfortunately, I don’t yet have any other relatives showing, but I’m sure the network will grow.

One thing I will is that I am seriously impressed by LivingDNA’s interpretation of my ethnicity.  It’s not 100% correct, because it doesn’t yet have reference populations for the Dutch side of my heritage, but to me, the British and Irish looks spot on.  below for you.   The only thing that doesn’t make sense based on what I know of my history is the East Anglian DNA (ironic since I was actually born there, but I have no known family or ancestors from there).  But I would lay good money on that percentage being moved to show as being Dutch once they get a Dutch reference population.  My ethnicity is based on my Ancestry raw data, so it will be interesting to see if the profile from my Living DNA kit differs, since Living DNA kits use a very different chip. 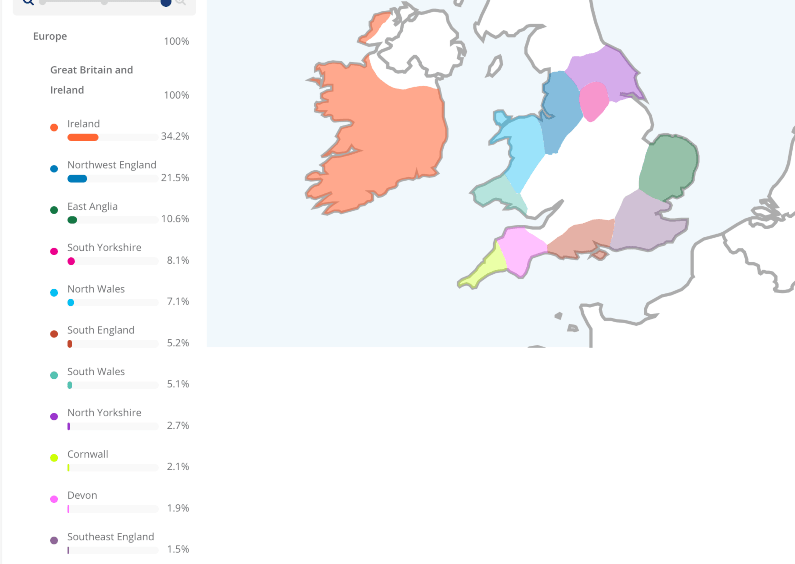 If you want to take advantage of LivingDNA’s Family Networks feature, but have tested elsewhere and don’t really want to buy a new test, you can use the following link to upload your raw DNA: https://my.livingdna.com/upload/start?referrer=5708e17f-3d43-49bd-a292-5505c7e982f9

I’m given to understand that in time you will have an option to upgrade your test results to get the ancestry/ethnicity profile, but this is not available yet.   You also don’t get the maternal or paternal haplogroup information since they require your DNA sample in order to build this.

All in all, I was really impressed by and am excited to see what happens with them in 2019.

I was really impressed with how the day and was so glad I had made the decision to come to the conference from such a distance.  Other than speakers, I believe I was the only overseas conference go-er.

However, the day was not quite over! I opted for buffet-style dinner in the hotel, before heading to the evening mixer / social.  I was a little since I only knew one person, but I needn’t have worried, as I met and chatted with several lovely people.  Given I was so jetlagged, I’d intended only to stay for one drink and then go to bed, but in I was there until they kicked us out!  It was so awesome to be in the company of like-minded people, I don’t think I’ve ever been in a situation before where I can chat with people in person about genealogy for several hours!