My story – searching for my American great-grandfather (part two)

Welcome to part two of my story – searching for my great-grandfather!  For Part one, click here.

Where we left the story

After DNA testing in an effort to find my grandfather Jack’s father, I had two close matches; the unidentifiable Bob, and the deceased Charles, and no idea what to do next.

After another week of ‘putting the internet down’, I tried to brainstorm a bit.  I had already built out Charles’s tree extensively, but it hadn’t led me anywhere; none of my other DNA matches appeared to share any of the names in that tree, and I could see from one of the censuses, that his grandfather had been adopted.  I assumed the link was on the adopted branch and stopped using Charles’s tree as a base for my research.  As I couldn’t work with Bob’s or Charles’s trees, that meant I had to look further down my matches.  This meant I was trying to find my answers from predicted fourth cousins only; a much bigger research job would be required, and I wasn’t sure where to start.

I jotted down everything my dad had told me, and I questioned him again to see if there was anything I had missed.  I also researched into why American servicemen were in Liverpool during the first world war.  It’s common knowledge that the US was heavily involved in the second world war and were stationed all over England, there were lots of what have become to be known as ‘GI babies’, and countless novels and tv dramas written which feature romance storylines of British young women meeting American military men.  However, I hadn’t realised that Americans had also been so involved in the first world war and were stationed in the UK.

I tried out the Ancestry surname search to look for the surname my father had remembered being told but had no joy.  To keep myself occupied, I started trying to find DNA relatives on the sides of my dad’s tree that I did know about, and also tried to segment my matches a little, so I could see who was likely related to each other, and who was likely on one of my English branches.  By this point, my mother’s DNA results had also come in, so I also spent some time looking at her matches to see if I could make any discoveries on the maternal side of my tree.

After a couple of weeks, I went back to my mystery great-grandfather search and got a bit more organised.  I had already tried everything I could think of to find out who Bob was (who still hadn’t logged back into Ancestry), with no success.  I even messaged a random user with the same name on Instagram in case it was him (it wasn’t, and thankfully he was very nice about it!).

Even though I didn’t know who he was, I knew that Bob was my biggest clue.  Therefore, I decided to scrutinise every single one of our shared matches to see if that led me anywhere.  It occurred to me that I could create a separate private DNA research tree and use that to try and narrow down my search, by building my own tree for those I was researching.

One match in particular interested me a lot; as well as sharing DNA with Bob and Charles, a lady we’ll call Lorna was also my fourth closest match, at 67 centimorgans with my father (a predicted fourth to sixth cousin to him). Although her tree didn’t feature any of the same surnames that Charles’s tree had, her profile and tree stood out to me.  She was one of the few matches to have uploaded a profile picture, and I thought that she looked a little like me.  She also had a few surnames in her tree that I could imagine having been Chinese-whispered into Barr, including the surnames Berry, and Blair.  The latter surname was particularly interesting to me because my third closest match was also a Blair. On a quick surname search, it appeared that my dad had several matches who had both of these surnames in their trees.

I was interested to look further and so I clicked through to Lorna’s full tree.   I immediately found something of interest; it wasn’t anything related to my family, but for some reason, it caught my attention.  Lorna had a note on a particular entry that she had used DNA to confirm a story her grandmother had told her, that her father’s father wasn’t the grandfather she had known but had been another man.  I suppose I felt this likened her background a little bit to mine, and for some reason, I decided that I was going to follow that branch of her tree.

Lorna hadn’t progressed the tree very far, so I decided this was as good a place as any to start my DNA research tree and I started with her grandfather’s details.  I then added his parent’s names as shown on her tree, and using Ancestry, built out the tree to his grandparents’ names – one set of whom were one Jesse Berry and Jemima Toll.

I was unable to find any concrete information for Jesse Berry; it seemed there were several people with the same name, and every Ancestry tree I found appeared to have conflated all the different names into one.  I looked up the profiles of all those trees to see if my dad shared DNA with any of them, but found nothing, so I moved to Jemima Toll.  That side was easier, and I was able to use Ancestry’s tree function to find official records, verifying my tree information.  It was when I looked at the hints for other users family trees featuring Jemima Toll that I realised that I was on something.  I saw a username that I knew I remembered seeing in my dad’s matches, and when I checked out the various user profiles that had Jemima Toll or her parents in their trees, I found several different profiles that had a positive DNA match to my father.  I finally had something to work with!  I must be somehow DNA connected to Jemima Toll!

I built out the Toll tree back as far as I could and got it to two further generations back.  From the DNA matches I had uncovered, I quickly became certain I had identified a pair of common ancestors for my matches that must also be common ancestors to me; Jemima’s parents, one Thomas Toll and Sarah Talbott.

This was amazing to me.  At this point, I didn’t know exactly what generation level Thomas Toll and Sarah Talbott were to me, but given the fact they were married in 1837, and both died in the 1890s, it seemed reasonable to assume that they were my third or fourth great-grandparents.  As far as I could identify, they had had 10 children – six sons and four daughters.  Other than being able to exclude Jemima as being my direct relative (because if she were, dad and I would have shared more DNA with Lorna), I had no idea which of those ten were my direct ancestor. Since the Talbott side were early settlers to the US and there were fairly extensive trees on Ancestry I was able to use those to build out that side a little further, and I found more and more matches that linked into this side.  I also hit upon another DNA match which ruled out another son.  Unfortunately, however, I struggled to find concrete genealogical records online for all of the Toll children, and so at that point, I couldn’t narrow down the search any further.

I decided to turn my attention to my third closest match, a man we’ll call Nick, with the surname Blair.  Although Nick didn’t have his DNA results linked to a tree, I noticed that he did have an ‘unlinked’ tree on Ancestry, which I took a look at.  It was pretty extensive and appeared to have been well researched with verifiable source documentation, so I was confident I could use it as a base to work from.  Nick did not share DNA with Lorna, and, other than Bob and Charles, their matches did not appear to cross over.  My working hypothesis was that I was looking at another branch of shared ancestors, and it was likely that this would lead me to someone who had married (or at least had a child with) one of Thomas and Sarah’s children.

I looked at Nick’s shared matches, and immediately found two matches who had trees built out which confirmed the paternal side, so I again started another private DNA research tree with Nick’s father as the base person, so I could follow the lines, and hopefully, meet up with the Tolls.   I had another helpful clue with this particular side, in that I could see that Nick’s paternal grandmother was of Swedish origin.  This did not appear to me to be the side I was likely related to, since I didn’t see many Swedish names in my matches as a whole, and the ethnicity results didn’t indicate that was an area we were from.

Following this hunch, I concentrated on Nick’s paternal grandfather’s side.  Here I initially found a few red herrings; his Blair side appeared to have the surname Cozad several generations back, and I had remembered seeing that surname in Lorna’s tree.  A quick DNA search confirmed that several of my DNA matches had that surname, and I was even able to confirm a shared Cozad ancestor for me.  However, it was so far back, it wasn’t a branch I could really research yet, and it didn’t explain the close DNA matches.  There was also a surname of Stockman on that side that I initially got really excited about because I knew I had seen it before.  Looking at Charles results confirmed that Stockman was a surname on his adopted side’s tree, and therefore not a biological relative to him.

When I looked at Nicks grandfather’s maternal side I almost immediately struck genealogical gold.  Nick’s paternal grandfather’s mother was a Nancy Ledgerwood.  I was quickly able to find Nancy’s parents, and when I used the Ancestry hints function to look at other users family trees featuring them, I had several DNA matches that had John Leman Ledgerwood and Charity Whitenack as direct ancestors.  Not only that but when I ran surname searches for both of those surnames I came across a lot more matches that had those surnames.  I knew I was on to something since those surnames were not exactly common.  The surnames Leman, Lemen and Lemon were littered throughout my dad’s matches.  I had just found another confirmed set of likely third or fourth great-grandparents, John Leman Ledgerwood, and Charity Whitenack. 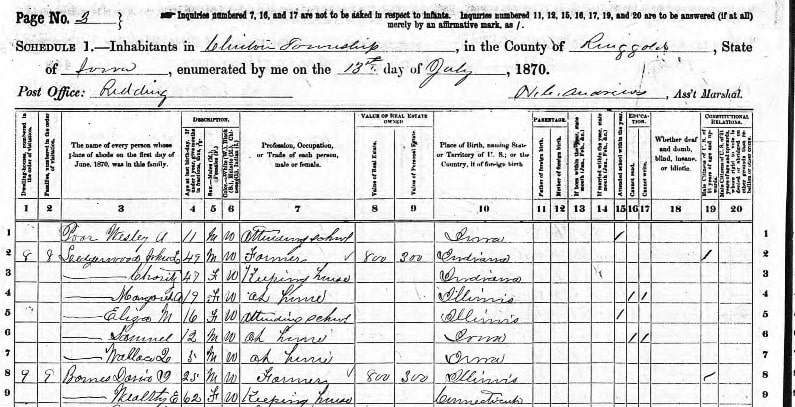 My Conclusions & Next Steps

John Leman Ledgerwood and Charity Whitenack were married in 1842 in Indiana and appeared from records to move around various states including Indiana, Illinois, Missouri and Iowa.  The seven Ledgerwood children (three daughters and four sons) I was able to find were born between 1844 and 1865.  Thomas Toll and Sarah Talbott were married in 1837 in Ohio and appeared to also move around various states, including Indiana, Missouri, and Iowa.  The nine Toll children I was able to identify were born between about 1839 and 1859.

Given that the respective offspring were born in approximately the same timeframe, and moved around the same states, this was yet more confirmation that I was on the right track.  Were these my great-grandfather’s grandparents I was looking at?