The top six DNA tools I can’t live without

The top six DNA tools I can’t live without 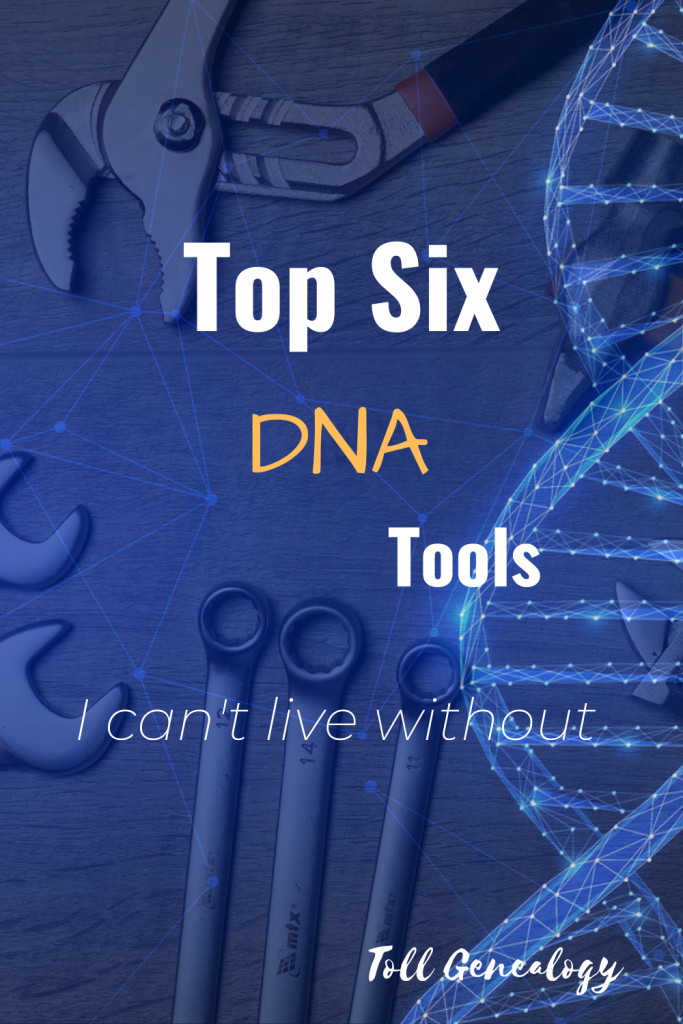 For my first article of 2020, I thought I’d talk about my favourite DNA tools and websites that I use to ‘do’ genetic genealogy.  Some are obvious and things that may be familiar to those of you that are more advanced, but if you’ve just got your DNA results through, you may not have got that far under the hood yet. More in-depth articles into lots of these tools will be coming over the next few months.  And if you did just get your DNA results through, don’t forget to grab my free guide for DNA Newbies.

What can you use it for?

But why would I want to do that, I also hear you ask?  Well, you can use it in a few different ways.  For example, you might want to create a group of DNA matches that you know exactly how they are related to you or a group of matches you want to concentrate on researching.

More helpfully you can use it to segment groups when you are researching.  A really simple way to begin your research, if you know some of your family tree, is to create one group for paternal matches, and another for maternal matches.  You might not be able to segment all your matches in this way, but unless you have endogamy in your family, or you have a parent from a country where DNA testing is not yet a thing, it’s usually quite easy to differentiate two different sides in your matches at least for closer matches  (if you don’t know who either of your parents are, you may not be able to label them as paternal/maternal yet, but you could label them say ‘Side A’ and ‘Side B’). 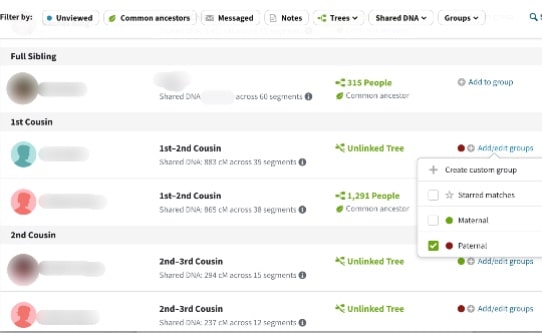 You can also use this same process to create groups of matches who share DNA with each other by using the shared matches tab of a particular match to colour everyone in that group the same colour; the likelihood is that those people share a common ancestor on a particular line or lines of your family tree. 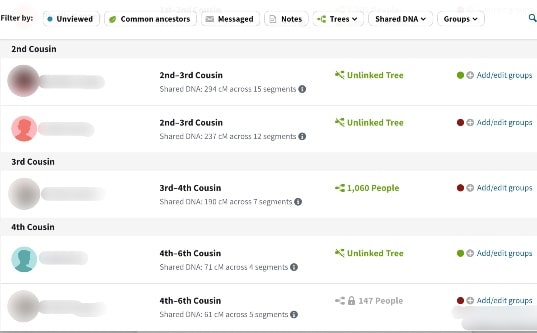 I’ll be covering how to use this feature in more detail in a future blog article, stay tuned!

Ancestry unveiled their Thrulines DNA tool, at the same time as the groups feature in 2019.  It’s not infallible, it does make some errors, but it can be a useful starting point, and it can uncover relationships that you hadn’t found, particularly in more distant matches I’ve found.

To use Thrulines, you must have a populated Ancestry tree, and your DNA results must be linked to a person in the tree.  Let’s see how it works in practice.

I have a 3x great-grandfather named Robert Tweedley, born in Scotland in about 1827. If I go to the Thrulines tool and hover over his entry, I can see that there are seven DNA matches who Ancestry can link to him: 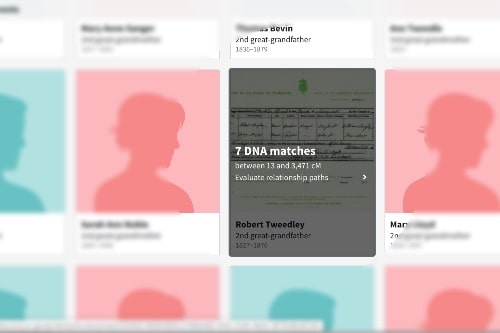 I can ignore some of the matches as they are my immediate relatives, I already know about them, we all descend from the same child of Robert.  Another match appears to descend from a daughter Margaret.  Three other matches are descended via Robert’s son James.  All are exactly third cousins to my mother, with the amount of shared DNA with my mother ranging from 13cm to 37cm. 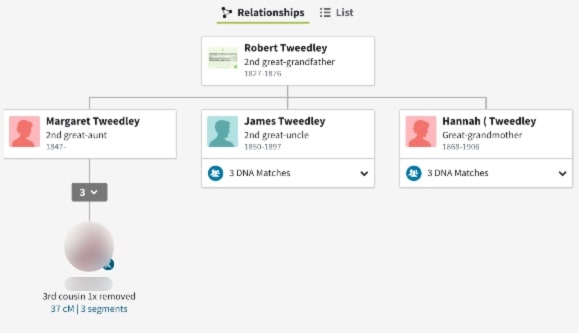 One of the matches only had a private tree and none of the other matches had fleshed out their trees as far as Robert, but Ancestry was able to use other public Ancestry trees and its records to fill out the details to prove the link, making it relatively easy for me to double-check the details and confirm that Ancestry had it correct.  Without Thrulines I wouldn’t have been able to work with one match at all unless they responded to a message, and for the others, I would have had to do a couple of hours of research at least to work out the link.

Let’s look at an example. When my dad first got his results back, his very closest match was 388cm. There are only a few possibilities for that relationship: 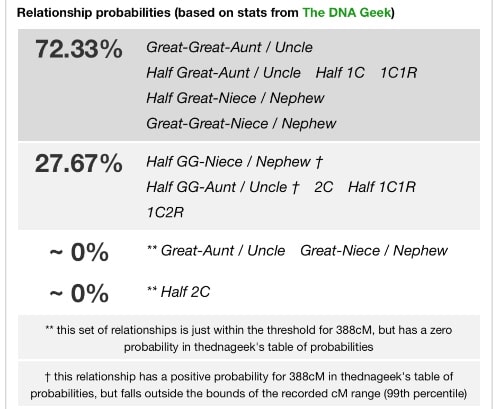 I knew I was looking for some kind of ‘half’ relationship, and I suspected that the match was either the same generation as my dad or at least once removed., therefore it seemed likely to me that they shared either grandparents or great-grandparents.  I now know that that particular match is my dad’s half first cousin once removed; my dad’s grandfather is the match’s great-grandfather, and so actually the correct relationship falls within the second group, which had a 27.67% probability rating (don’t assume that the lower probability relationships can’t be true!).  Once you start working with matches a lot, using this tool is so useful to remember what range of relationships you might be looking for, and it’s one I use extremely regularly (as in every time I am doing DNA research).

Not exactly a DNA tool but definitely a research tool.  When I am researching unknown matches, I often utilise what I will term ‘people search’ websites, particularly with American matches. I got so used to people never responding to messages that I now do this as a matter of course before I ever try to contact them.

If a match has identified themselves with a real name and perhaps some location information, but there is no tree for them, you can use people search sites to see if you can find out any further information on them.  Sometimes its as easy as doing a Google search with the information you have, other times its easier to start the search at a particular site.  If you’re in the US you have access to a whole raft of people search sites, some free options and some paid.  Until recently my favourite was FamilyTreeNow.com, but this appears to now have been made unavailable for people outside of the US (or at least those in the EU), so now I tend to use Whitepages; not quite as useful, but still helpful.  For example, I just got another new match in for my dad with an unusual name, and when I checked that name at Whitepages I can see only one in the entirety of the US, and the location of that person is the same as one of the matches we both share, therefore I suspect this person is probably a close relative of the other match (though it could, of course, be coincidence).  In the UK you can use 192.com or if you are a FindMyPast subscriber they have up to date Electoral roll information.

The other place I check, particularly for matches who appear to be younger in age, is Facebook, and this can sometimes be extremely useful. People often share old photos of their relatives on their Facebook profile or even talk about their DNA results, and if other relatives comment on those things it can be a pretty quick process to build up a basic picture of a family unit to enable you to then search for records at Ancestry to begin to work out how they are related to you.  Facebook is also helpful for places which don’t have publically accessible databases outside of that country (at least as far as I’ve found) such as Ireland, Canada, Australia and New Zealand.

Using tools such as these you sometimes realise that two matches in your list are actually parent and child, but you wouldn’t necessarily have suspected that due to different last names.  I have had this happen a lot with Ancestry matches where there is no way to know how much DNA two matches share with each other without asking them if they will tell you.

I’m going back to DNA Painter with this one, this time to talk about the What are the Odds or ‘WATO’ tool.  The WATO DNA tool is brilliant for those trying to solve unknown ancestor mysteries where you have DNA matches who all descend from one (or a couple) common ancestor/s and you’re trying to work out how you fit in.  You essentially build a descendant chart from that common ancestor, add in their offspring and so on until you get to your DNA matches; at that point, you include the exact centimorgan match count you have with that match, so you end up with something that looks a little bit like this:

Once you’ve created your descendant tree, you can basically add in entries for where you think you may fit, and select ‘use as hypothesis’ in the dropdown menu.  Here I’ve taken the same tree from the previous example and added in a number of possibilities for where the DNA tester might fit. 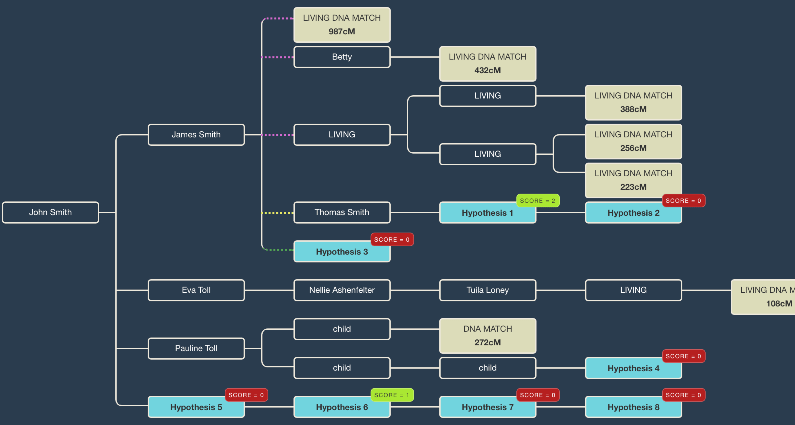 Anything with a positive green result is mathematically possible, anything red isn’t.  Once you’ve worked out what is possible / most likely, you’d be working to try and prove which is the correct relationship.  In my professional work, I use this tool all the time; I’m not a ‘mathy’ person, so being able to try out different scenarios and to be able to save them in this tool is brilliant.

Not technically a DNA tool at all, but having a family tree built and linked to DNA results helps Ancestry work out how matches are connected for you.  Not only that, but I actually use the Ancestry tree builder in preference to any other family tree online solutions or software, because it’s so easy to use, and it’s so easy to change things.  It’s also possible to have multiple trees for research purposes, you can make them entirely private and unsearchable if you’re researching and don’t want others to use your work (especially if you’re testing hypotheses which may be incorrect), and it’s really, really easy for a team of people (or a family) to collaborate on building a family tree. It’s easy peasy to attach your sources, and, if you’ve made a mistake, or you realise you have the wrong person in a tree somewhere, it’s very easy to change relationships.  You can even add two separate sets of parents to a person if you wish; maybe you’re not sure on identities, maybe you want to attach adoptive parents as well as biological, in short, there’s generally a way to achieve whatever you want to record or research.  I adore Ancestry’s tree builder and use it extensively.  I have a crazy number of family trees on my account (and haven’t been told off yet!).

It’s also worth noting that MyHeritage has very similar technology if you build a tree at their site and connect it to MyHeritage (or uploaded) DNA results in your tree, their ‘Theory of Family Relativity’ will try and come up with ways you are connected to your matches.

So there you have it, it wasn’t quite top 5 as I couldn’t pick just five, and it’s very Ancestry heavy, but these are all things I use on pretty much at least a daily basis to do my genetic genealogy work, genuinely, and I do routinely use Ancestry more than other sites (though Gedmatch comes in a very close second).  I don’t exclusively work with AncestryDNA results, but if I had to pick one company to use exclusively it would be Ancestry because they have the biggest database and best tools and a good user interface, though I do moan about its bugginess, and I will ever yearn for them to provide a chromosome browser.

Next time, I’ll be taking a more in-depth look at the suite of DNA Painter tools – stay tuned!  In the meantime, pick up my beginners guide to what to do with your DNA matches if you don’t have it yet… or if you are just thinking about DNA testing and are confused about which test to take and which company to use I have a free guide for you too – click here to get your free DNA roadmap!