All About Genetic Networks 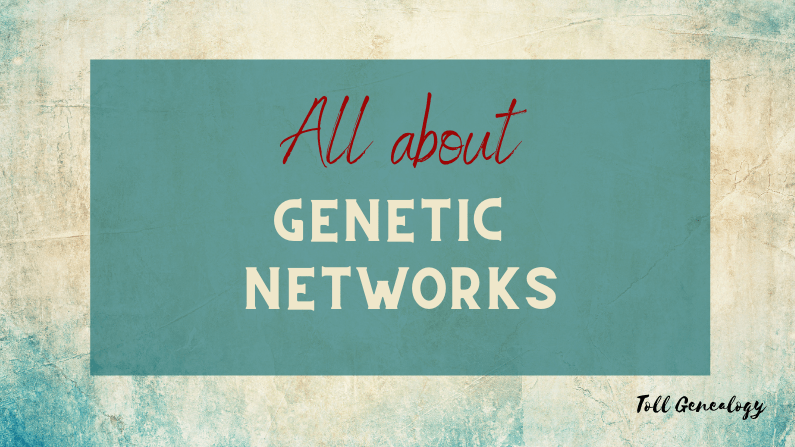 Today I get to talk about one of my very favourite subjects – Genetic Networks!

What are Genetic Networks

Simply put, a genetic network in genealogy terms is a group of matches who all share DNA with each other. They all share a common ancestor with each other, and whilst the ancestor you share with each person in that group will vary, that ancestor will come from the same branch of your family tree.

Utilising genetic genealogy for your own family tree often starts with identifying genetic networks, particularly if you have lots of matches.

How genetic networks appear looks a little different depending on which company we are talking about, so let’s go through each company in turn.

As we saw last week, with Ancestry, the shared matches tab within a DNA match’s page shows you all the people in Ancestry’s database who also match with that particular match and that can help you identify genetic networks using Ancestry, by using their colour dots group feature I mentioned last week.

The only issue with the way Ancestry does things is that Ancestry doesn’t tell you exactly how much DNA the matches share, or give you chromosome information – that can mean that matches show up coincidentally and are not really part of a genetic group.  What I mean by that is, although you share an ancestor with Match A and Match B, the fact that Match A shares DNA with Match B is actually nothing to do with how you share DNA with Match A.  Ancestry is just picking up that you both share DNA with that person.

You won’t really know this unless you start working with the group and identify how you relate to people in that group (or how they relate to each other), so my suggestion is, don’t worry too much – after all, a spade is usually a spade.  You can sometimes figure it out by say looking at Match B’s shared matches and realising there is no correlation with everyone else in the match group.

FamilyTreeDNA‘s version of genetic networks is ‘in common with’.  You can also use their chromosome browser to check if matches “triangulate” with you and each other (this essentially tells you whether three matches all share exactly the same bit of DNA – if you do you can be sure it originally came from the same common ancestor in your respective trees).  Note, you will need to either actually test with FamilyTreeDNA for this, or if you uploaded your DNA to FamilyTreeDNA, purchase the $19 unlock fee.

FamilyTreeDNA have changed their interface recently, so if you have FamilyTreeDNA test results and haven’t logged in recently, you may be confused about how to see ‘in common with’ matches – the below graphic shows you exactly where the button now is from any given match.

23andMe calls shared matches ‘Relatives in Common’.  To see all the matches you share with a person, simply scroll down to the bottom of the match’s page and you should see a list of those who share DNA with the person – 23andMe also tells you exactly how much DNA the two other people share with each other, and if the matches have chosen to share DNA information with their matches, you can also see whether you all share the same bit of DNA with each other – either simply with the Yes/No you can see in the last column, or by clicking the yes/no to enter into the chromosome map. 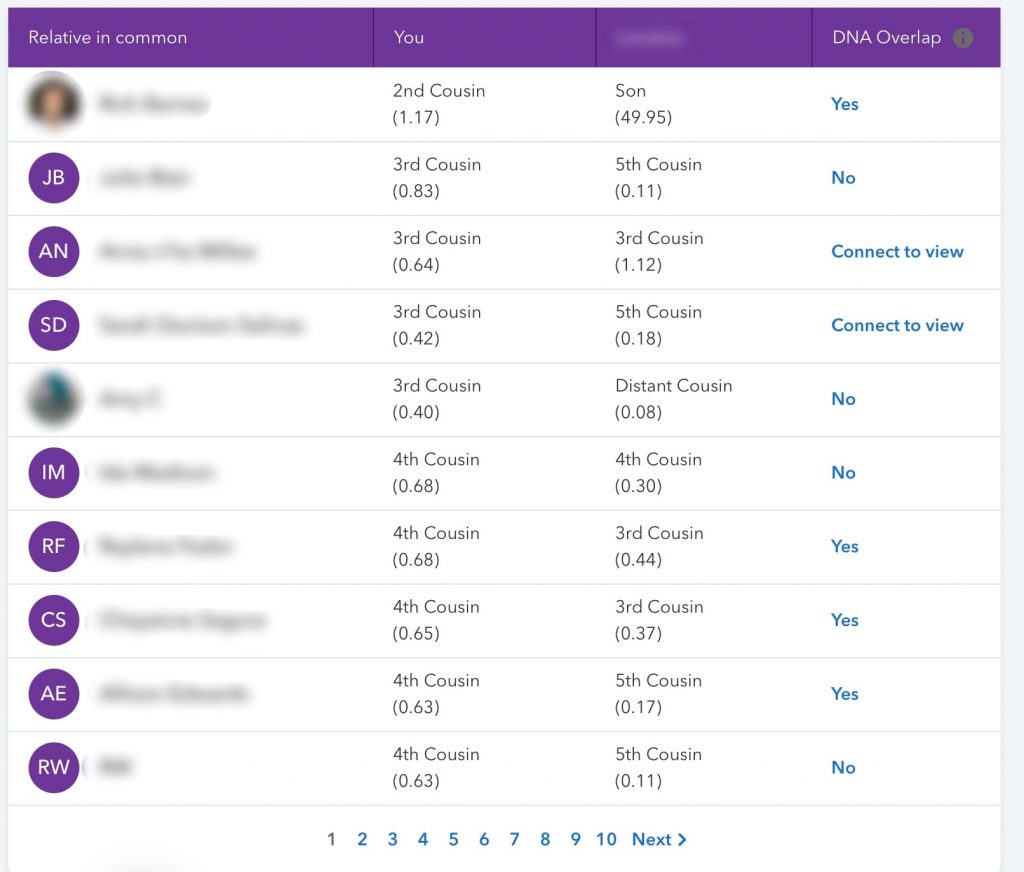 MyHeritage also displays this information nice and simply, although you will need to either actually take a MyHeritage test, or purchase the £35 unlock fee/have an active subscription to see full information.

Within a match’s page, the first section under the match’s details is ‘Shared DNA Matches’ – this information is really nicely laid out, you can see how much DNA the match shares with the other match, and a neat graphic on the right side tells you if you all share the same bit of DNA. 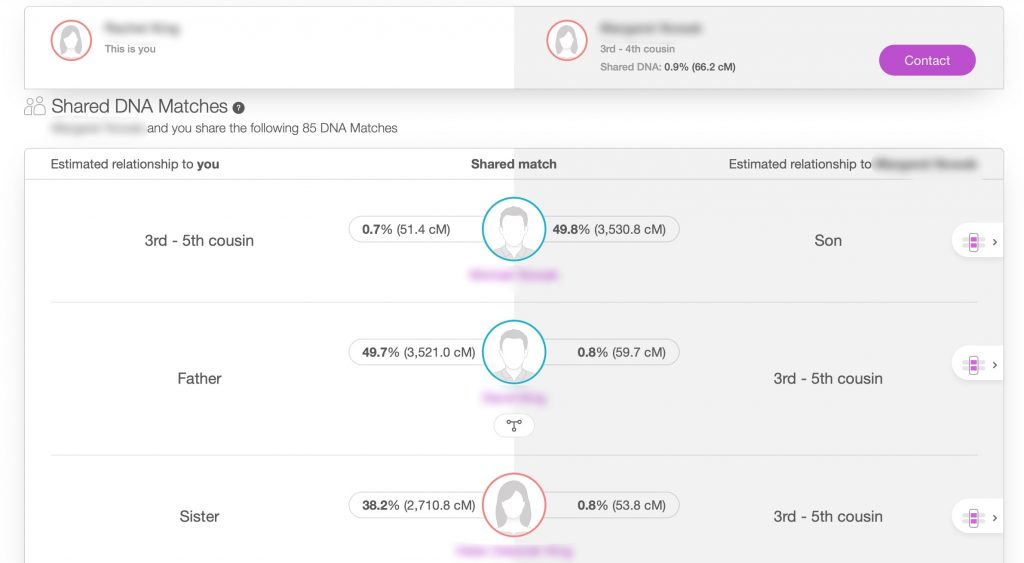 If you’re a Gedmatch user, you can use the free tool ‘People who match both, or 1 of 2 kits’ to check two Gedmatch kits and see who shares DNA with both kits.  You’ll only really want to look at the top section – the ‘Shared’ column under each kit shows you how much DNA each person shares with the other kit.  You can also utilise Gedmatch’s 3d chromosome browser to see if you share the same bit/s of DNA with each other, or if you are a Tier 1 user, the Matching Segment search / Triangulation tools allow you to see this information for the whole of your matches (though I do not recommend using the Tier 1 tools at Gedmatch if you are just starting out!)

LivingDNA also provide shared match information, although not in any detail (although I believe this is on the list to come in future).  The interface is a lot like AncestryDNA in which it shows you the DNA match and how much DNA you share with them, although not how much DNA the other match shares with that person.

An example in practice

Let’s look at one of my matches who figuring out was pivotal in me being able to solve my own mystery.

This particular match, we’ll call him Matt, shared 114cM of DNA with my dad.  Matt had a short family tree which I was able to extend out to 2x great-grandparents, which was likely to cover all the possible common ancestors my dad shared with this person (technically I may have needed another generation, but statistically it was less likely that I would need to).

I knew Matt shared DNA with my (then) two closest matches, but I had been unable to figure out those two matches at all – one had a very common name, and no information to allow me to identify him, and the other had a full family tree but one adopted grandparent.

So ignoring those two closest matches, this is what I had to work with: 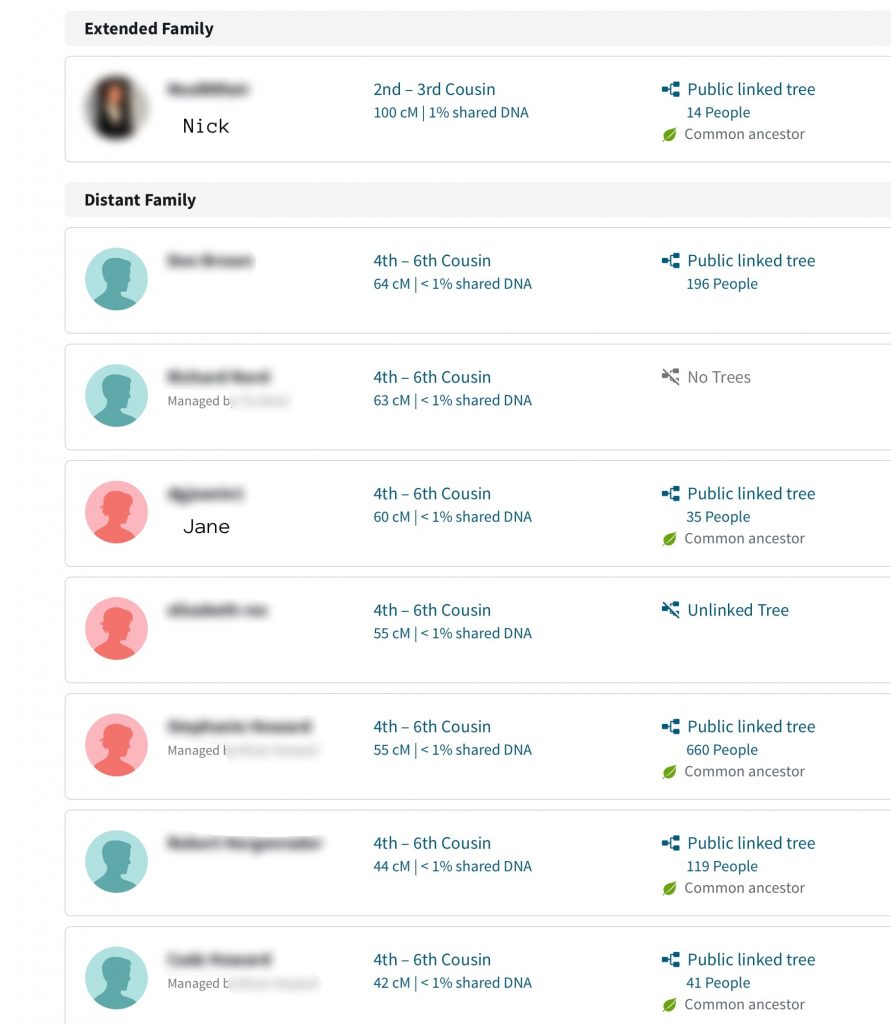 Ignore the common ancestor labels – they were not there when I did this research, and Thrulines didn’t get exist! That would have made this research so much easier!

That top match you can see, we’ll call him Nick, shared 100cM of DNA with my dad, and he also had a small family tree, and I could see that one of his great-grandmother’s was called Nancy Ledgerwood.  My main match, Matt, had a great-grandfather, Wallace Quincy Ledgerwood.

The next few matches you can see didn’t actually exist in my dad’s match list at the time, and the next identifiable match shared only 60cM of DNA with my dad, let’s call her Jane.  Jane also had a little family tree, and I could see she also had Wallace Quincy Ledgerwood as a great-grandparent.

This meant I was fairly certain I descended from the Ledgerwoods somehow, I just needed to figure out how.

I did a little genealogy and worked out that Wallace Quincy Ledgerwood was the son of John Leman Ledgerwood (1820-1901) and Charity Whitenack (1823 – 1906), and a little digging into Nancy confirmed that she was their daughter also. From there I was able to do some further research in my match list and confirmed that I descended not just from the Ledgerwoods, but also the Whitenacks, making it very likely that I also descended from John Leman Ledgerwood and Charity Whitenack (and to save you wondering, a lot later I was able to confirm that I descended from their daughter Eliza who was one of my 2x great-grandmothers).

This is just a very simple example to show you how genetic networks work in practice.  To get started using them yourself, you can either use the Ancestry dots feature to group your matches, or check out the Leeds method here – Google sheets is perfect for this (and free), although I personally use Microsoft Excel.  You can either make your match spreadsheet by hand, or some companies (MyHeritage and FamilyTreeDNA for example) allow you to download a spreadsheet of all your matches to make getting started easier.

When you don’t have genetic networks

A quick mention of two complications in using genetic networks which may affect you.  You might find that your shared matches are very sparse, or that you have no shared matches with most of your matches (particularly if you don’t have a lot of close matches in the first place), or you might find that everyone matches each other, and there is considerable overlap between your match groups.

The first situation likely means you descend from a place where DNA testing is not available / popular, or that the luck of the draw just means that you don’t have many DNA relatives who have tested as yet.  If this is you, don’t worry too much about genetic networks and just work with matches individually.  In time hopefully shared matches will start to appear since new people DNA test all the time.

The second situation likely means you descend from a place where endogamy is a factor – perhaps you have Ashkenazi Jewish heritage, or your ancestors were from a geographically isolated place like Puerto Rico – or maybe you have strong roots from the earliest settlers of the US.  This is not something to worry about at all, but does make genetic networks a little harder to work with for you.  Again, just work with groups/matches as best you can.