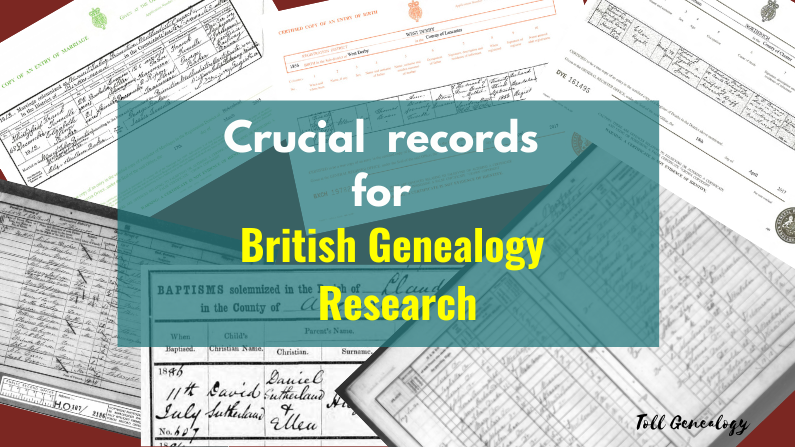 This week I’m going to focus on the key records you need to do British genealogy research, starting with the group of records that most people are somewhat familiar with, and that is births, marriages and deaths.

Civil registration began in England and Wales in September 1837; prior to that the only records of a person’s coming into the world, marrying or leaving it were held by the church that was responsible for their baptism, marriage or burial.  Civil registration meant that official mandatory records for these key events in a person’s life now existed and have been kept from the day they were instituted.

What information is on the certificates? 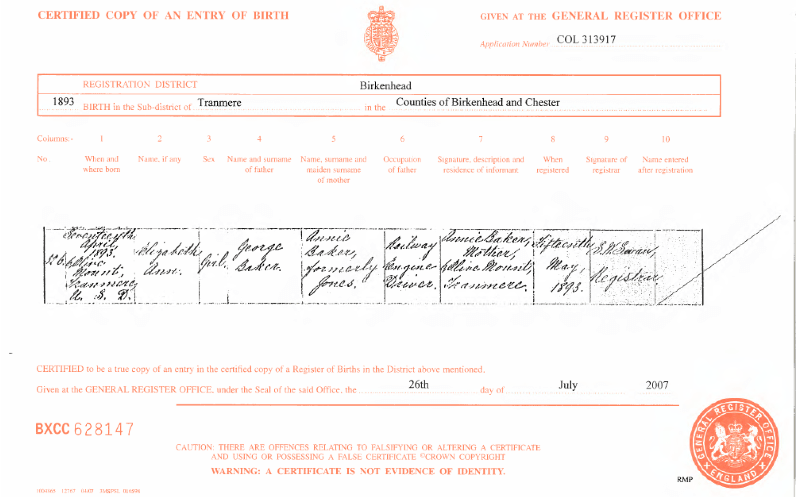 Marriage certificates give the following information: 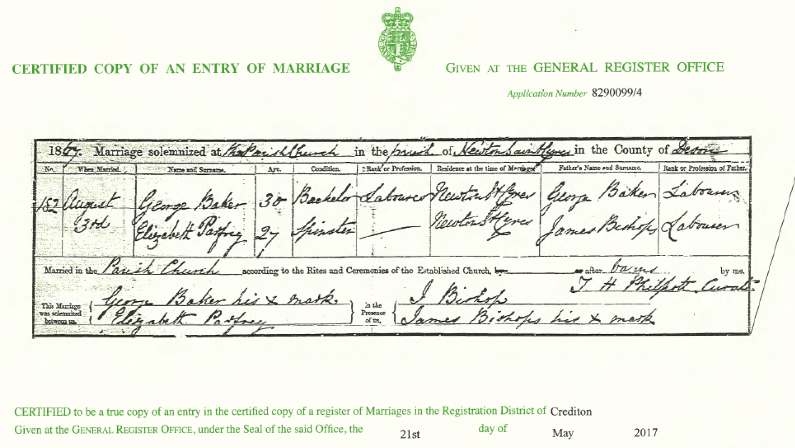 Death certificate don’t contain much information to help further a family tree, but do contain the following:

–       Date of death and address where died
–       Name and approximate age of deceased; if male their occupation (for females, this may contain an occupation, may be blank, or if they had been married during their lifetime, it will usually indicate “wife or widow of” which can help to identify a husband’s identity if not already known)
–       Cause of death
–       Informant to the death and their address (if this is a family member this can be useful)

A number of sites have the indexes to births, marriages and deaths for England and Wales including:

Which site you use to search on really is down to personal preference; personally my preference is to go straight to the GRO indexes when I know roughly when the person was born, since I can then proceed straight to ordering the record through them.  However, not all years have the search available, and as I indicated above, you can’t search for marriages on that site.  When I can’t use the GRO I generally use Ancestry or Find My Past – Find My Past’s search function is a little bit more straightforward, and I find the range of search parameters I can use a little bit better than Ancestry’s.

Civil registration (known as statutory registration) in Scotland began in 1855.  Scottish records contain a wealth of information not included on English and Welsh civil records.

You can see how this is a wealth of information for any genealogist!

The primary place to search for Scottish statutory records is ScotlandsPeople, which is the Scottish equivalent of the General Register Office.  It is free to search.

The other wonderful thing about ScotlandsPeople is that all statutory records over 100 years old have been digitised and are available for immediate view and download.

ScotlandsPeople operate a pay-per-view charging system. Each record costs 6 credits, but the minimum amount of credits you can buy in one sitting is 30 credits, which costs £7.50.  However, if you know you will eventually be purchasing more records, it makes far more sense to buy 40 credits for £10.00 (or you can buy 80 for £20 or 160 for £40).  If buying 40 credits for £10, this brings the cost per record down to £1.50 each. ScotlandsPeople also have a number of other useful records for genealogy including census records, parish records, wills and other documents.  Be warned though, credits expire two years after purchase so use them or lose them!

GRONI’s search function is a little confusing; you can do a basic search for free but need a credit to view, a full search costs one credit (50p) and to view full registration details costs five credits (£2.50); for some records the full registration details will include a transcript, for others an image of the original record will be available.  There’s no minimum to how many credits you can buy, but you cannot buy or hold more than 200 credits (£100) at a time.

If you’re not sure whether your Irish birth/marriage or death took place in what is now Northern Ireland, you may want to search Irish genealogy records as well – these can be searched through irishgenealogy.ie. For information about ordering certificates please see https://www.irishgenealogy.ie/en/civil-records/help/i-want-to-get-a-copy-of-a-certificate-what-do-i-do.

You can try searching for records online through ManxBMD.com, and certificates can be ordered from https://www.gov.im/categories/births-deaths-and-marriages/.  For other Isle of Man research, you may also be interested in checking out the wonderful iMuseum – an online archive with useful information for the genealogist as well.

Census records are the main other form of official record that provides useful information for British Genealogy research.  We have census records for the period 1841 to 1911 currently, with the 1921 census for England & Wales due to be released through FindMyPast in early 2022, and the Scottish 1921 census due to be released through ScotlandsPeople later on in 2022.  In addition to the official census is the census substitute, the 1939 Register.

The 1851 to 1901 censuses broadly contain the same information on a particular household: 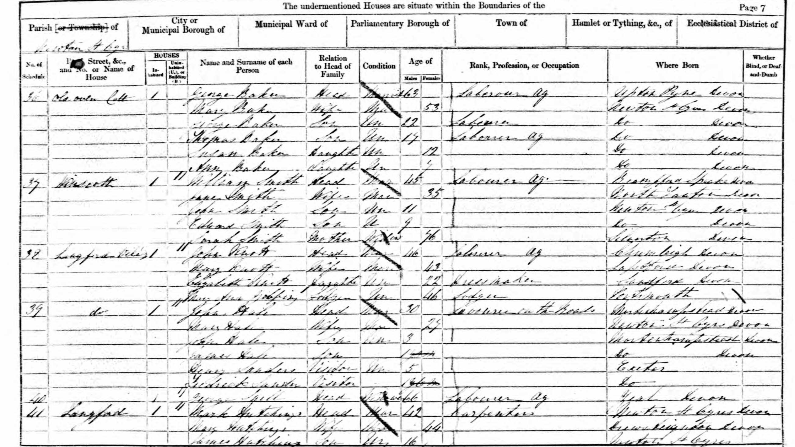 The 1911 census is in the same format as these earlier censuses but contains extra useful information including how long married couples have been married for, how many children they have had, and how many of those children are still living.

It also provides more information about how each household lived, since it also gives the size of the dwelling in which the household lived.  Finally, for England and Wales at least, it’s the first census for which we have been given access to the actual sheets filled out by the householder; which means that we can see the handwriting of the person who filled out the form (usually the householder if they were literate); perhaps not that useful genealogically speaking, but of immense human interest to be able to see the actual handwriting of our ancestors. 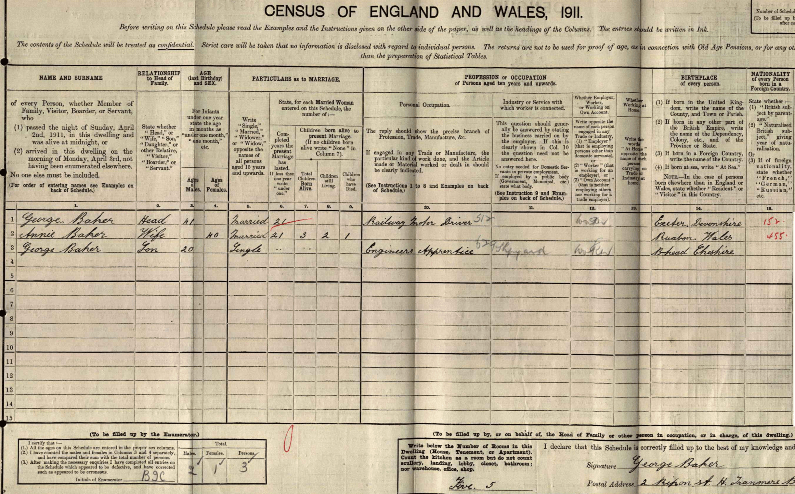 The 1841 census, as the first one which took householder information contains less information, but can still be useful, containing: 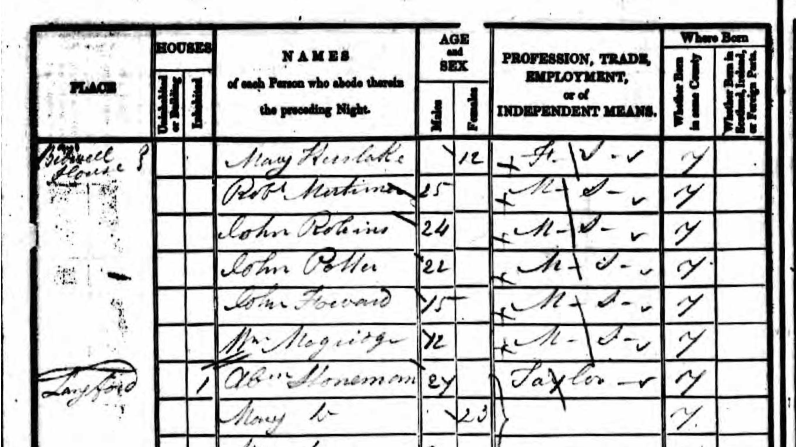 The 1939 Register is not technically a census, but it is a record of households in September 1939 and was taken to produce identity cards for people due to the Second World War.  It was also used to for various war purposes including to issue ration books.

The 1939 Register only covered England and Wales, and only contains civilians and members of the armed forces who were on leave at the time it was taken.  It’s also important to note that records of those born more recently than 100 years ago are closed, unless the person is known to have died.  For more information about the 1939 Register please see https://www.nationalarchives.gov.uk/help-with-your-research/research-guides/1939-register/.

Most genealogy sites have access to the England and Wales censuses.  I recommend the following:

For Scottish census records, Ancestry has transcriptions, so it can be helpful to search there first for likely records, then once you’ve found the right record, search through ScotlandsPeople for access to the actual image (cost 6 credits).

For births, marriages and deaths prior to September 1837, church records are the place to go, since churches took records of all the baptisms, marriages and burials that took place.

The records tend to differ in what information is recorded, with burials usually indicating just the person’s name, age and when buried, and marriages just giving the bride and groom’s details, and who witnessed the marriage.  Birth records tend to be a bit more detailed indicating the parents’ names and father’s occupation, and where they lived (often just a village or locality name is recorded).  Often baptism records will just include the baptism date, but sometimes they will include the birth date as well.

In the relatively recent past, searching for these records usually meant trekking to the relevant local records office or archives where the relevant church’s records were kept – which of course meant you had to have a good idea where the event took place.  However, now we have a wealth of parish records online, and more make their way online all the time.

The downside of this is that not all companies have the same records, though you can very often find a transcript of an English or Welsh record through FamilySearch, Ancestry or FindMyPast, and one or more of these may have the original image available as well.  I tend to try a search on all three sites to try and find what I’m looking for if I’m not sure exactly where it took place.  If I do know roughly where the event took place in, I’ll usually use the FamilySearch Wiki to see where best to search for records online.

These are the primary records I recommend you become comfortable with, but that is not to say there are no other useful records for British genealogy research, there are many other records that you may find helpful including probate records and wills, obituaries, actual gravestones, military records, land records and ship manifest records, just to name a few.